Email ThisBlogThis!Share to TwitterShare to FacebookShare to Pinterest
I'll be on the Son Rise Morning Show on EWTN radio this Tuesday morning at 7:45, to talk about my second book on the Mass and the new translation, Praying the Mass: The Prayers of the Priest.
Links to this post at 5:15 PM 4 response
Labels: ewtn, praying the mass, radio

Email ThisBlogThis!Share to TwitterShare to FacebookShare to Pinterest
Jeffrey Pinyan will be doing a 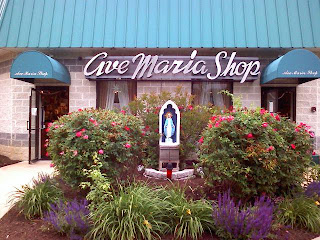 Links to this post at 1:59 PM 0 response
Labels: praying the mass

Books on the Eucharistic Prayers of the Roman Rite

Email ThisBlogThis!Share to TwitterShare to FacebookShare to Pinterest
Starting in June, I will begin work on the third volume of Praying the Mass, which looks at the Eucharistic Prayers of the Roman Rite (and their new English translation in the third edition of the Roman Missal).  As of right now, I am not planning on including the Eucharistic Prayers for Children, but I may change my mind about that.

What follows is my research list; these are books that do at least one of the following:
If you know of any books not on this list that you think I should get, please provide them in the comment-box!

Links to this post at 7:46 PM 1 response
Labels: eucharistic prayer, praying the mass

Lectors: prepare ahead of time!

Email ThisBlogThis!Share to TwitterShare to FacebookShare to Pinterest
This delightful anecdote is from Paul Ford (around the 27-minute mark of the first video on this page).


Readers should never pretend to wing it.  The worst example I can give you:  the feast of Corpus Christi, the reader, a very talented actor in the parish, an Irishman, flew into the sacristy and said "What's the reading today?" They showed it to him, he looked it over, okay.  1st Corinthians.  [He said:] "The bread that we break is not the body of Christ. The cup that we bless is not the blood of Christ."

What is the Mass for?

Email ThisBlogThis!Share to TwitterShare to FacebookShare to Pinterest
I know I slept through most of my RCIA classes, but what is the Mass for if not to meet the spiritual needs of the people attending?

I’m sorry that you slept through your RCIA classes. Learning about God and the Catholic faith shouldn’t have to be boring!

The sacred liturgy is, above all things, the worship of God. Even if we were to get nothing out of Mass — we were distracted during the readings, or we didn’t understand them, the homily was replaced by a Bishop’s Annual Appeal video, and we did not receive Holy Communion (for whatever reason) — still, vere dignum et iustum est, aequum et salutáre, nos tibi semper et ubíque grátias ágere, Dómine, sancte Pater, omnípotens aetérne Deus, per Christum Dóminum nostrum.*

But there’s more to it than that, of course. Mass has four ends; the acronym “ACTS” or “PACT” has been used as a mnemonic.**
Even when we don’t particularly feel contrite, the Mass calls us to contrition; even when we don’t feel like giving thanks, there is the Eucharist; even when we are struggling to adore God in the midst of natural disasters that take the lives of thousands and tens of thousands, the liturgy puts on our lips a Gloria or a Glory Be or an Alleluia; and even when we think we’re doing pretty well for ourselves, thankyouverymuch, the Prayer of the Faithful challenges us to be “poor in spirit” and to throw all our cares (and those of the whole world) upon the Lord. That’s meeting our spiritual needs, even when we don’t acknowledge we have them. (And the Mass is beneficial even for those who aren’t in attendance.)
All these ends are directed to the glorification of God: adoration and thanksgiving immediately so, and contrition and supplication mediately, for God is glorified in His mercy and generosity. Those latter two ends are directed toward our sanctification.

To be even more succinct, the Mass and the whole liturgy of the Church is directed to the glorification of God and the sanctification of humanity. That’s what Vatican II said several times:

Christ indeed always associates the Church with Himself in this great work wherein God is perfectly glorified and men are sanctified. (SC 7)

From the liturgy [...] the sanctification of men in Christ and the glorification of God [...] is achieved in the most efficacious possible way. (SC 10)

The purpose of the sacraments is to sanctify men, to build up the body of Christ, and, finally, to give worship to God. (SC 59)

There is hardly any proper use of material things which cannot thus be directed toward the sanctification of men and the praise of God. (SC 61)

The purpose of sacred music [is] the glory of God and the sanctification of the faithful. (SC 112)

* "It is truly right and just, our duty and our salvation, to give you thanks always and everywhere, Lord, Holy Father, almighty and eternal God, through Christ our Lord."

** Another mnemonic, PART, uses "Reparation" in place of "Contrition".  Yet another is ALTAR: Adore, Love, Thank, Ask, Repent.
Links to this post at 12:15 AM 0 response
Labels: liturgy, sacrosanctum concilium

Responding to criticism about my books

Email ThisBlogThis!Share to TwitterShare to FacebookShare to Pinterest
In a recent thread on the Catholic Answers Forum (now locked, because the conversation went off-topic), I had a bit of a back-and-forth with a clergyman (whether deacon or priest, I do not know) who goes by the handle FAB about my books.

I was bit short (and rude) with him as you can see below, but I'm trying to mellow out and be more civil and charitable as our conversation continues.


At this point, the thread was locked because the content of my books was not the topic, and the conversation on the topic had ended.  So we went to messages.